The 2020 school year is in various stages of wrapping up, and COVID has taken the stage instead of the graduates. Seeing the graduate's disappointment reminds me of my high school days and how much I hated school, and just how fitting my final day in high school was. That day will always be one of the funniest incidences of my youth. I should preface by saying that I now have a GED.

So, I was valedictorian of my graduating class, which might sound impressive until you discover that I was also the very first graduate of my school, Christian Fellowship Academy. Yes, I attended a small, private school, which was basically, a one-room schoolhouse attached to a church, which was out in the middle of a cotton field, which was out in the middle of no where. I would love to tell you that I was outstanding in my field, but I would have to clarify that I was actually out, standing in my field.

Being a homeschool graduate in the 80s was being a pioneer in many ways, and it was certainly unprecedented. As the first graduate of a school, I was allowed some creativity, and the principal commissioned me to choose the school colors!  Not many people can boast that claim, (if it’s a claim worth boasting.)  I chose blue and white, the colors of Westbrook ISD, my former school before leaving the public school system.

Being the first also presented some challenges that were unique. In order to graduate, I would have to acquire my own graduation gown. (In those days, you didn't simply order one on Amazon.)  I went down to Westbrook and asked if I could order an additional gown when they ordered their blue robes.  They agreed to help me and we arranged to have the gown shipped directly to my school.  The gowns were scheduled to arrive a week before graduation, but they were shipped late.  In fact, the shipment came only two days before graduation, and I was highly stressed over my predicament.  However, the real stress began when I opened the box.  Somehow, the order got mixed up and they sent me nine red gowns, instead of one blue gown.  It was too late to fix the mix-up, so I changed the school colors to red and white.  Not many people can claim to have enough influence to change their school’s colors on a moment’s notice! But, it makes for a fun story, so let’s roll with it.

My family and I practiced my march down the isle of our small church, but realized that “Pomp and Circumstance” wouldn’t play one full round due to the short isle.  So, we decided that Vicky, our pianist, would play the song all the way through, and then I would step out, and walk as painfully slow as I could manage. (I must have looked like a bride’s maid slowly gliding to the altar.)  We practiced until everything went smoothly. 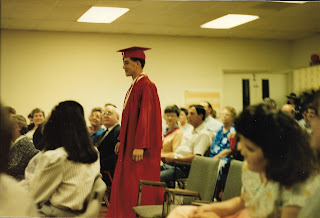 An hour before graduation, Vicky called to tell us that she was not going to make it that night, but she had given the music to an alternate pianist.  Barbara had never played “Pomp and Circumstance” but felt reasonably certain that she could handle the piece.

When time came for the march, I stood in the back with my red gown and listened as Barbara started playing.  In all the confusion, no one told her that she was supposed to play the entire song once through before I would start my painfully slow march.  When Barbara started playing and realized that I wasn’t marching, she assumed that something was wrong and stopped playing. I didn’t know what to do, but someone told Barbara to start playing again.  She did, but stopped again when she didn’t see me marching.

In the back of the church, we huddled up and decided that when the music started again I would march without waiting for a full round.  Unfortunately, Barbara was becoming rattled from all the confusion.  While we were reorganizing my march, someone whispered the original plan to her, but we didn’t realize that she was up to speed.  She decided to set a faster tempo for the first round, and slow down for the actual march.

Alas, we didn’t know that she would play one full round.  So, when the music started at that fast tempo, I stepped out.  I was making good time until Barbara saw that I was marching to her rhythm. Surprised, she slowed down in the middle of my progression.  I had to alter my speed and almost fell down.  Fortunately, it was a short isle and I was at the stage in a flash.  I called it my “Prompt Circumstance.”  The rest of the ceremony went fine, except that I was redder than my gown, and I dropped my graduation trophy and bent it in half.  Oh—and I should mention that there is no evidence of this event, as the only known recording was accidentally recorded over a few weeks later while hastily attempting to catch an episode of MacGyver.

And the reason I have a GED—no college would accept my high school transcript and I had to get one before I could enroll. Not every valedictorian proudly displays a GED alongside his diploma!

My life is always eventful.

Here's another fun high school story about the very last track meet I ran. It was a record-breaking event, and I was formally asked to leave the track by a man holding a gun …
Posted by Travis at 6:55 AM