Good News! I have it on good authority there will be more books coming from Rachel!

Thirteen years ago, I was an eighteen-year-old girl who was trying to find her place in the world. Fresh out of high school and with no immediate plans to attend college, I landed a job at an established and very sophisticated inn. It was there that my adult life began.

Unbeknownst to me at the time, one co-worker’s request would become the premise to my first book.
Serving breakfast was just one of my many jobs at the inn. I worked closely with two other women who quickly became my friends. They were older than me, and the age gap allowed us to mesh well. It was on a summer morning when my co-worker asked me to write her son who was serving in the US Army. 9/11 was nearly one year old, the call to arms was still fresh, and the uncertainty of service members’ lives was at stake.

I agreed to write to my co-worker’s son on the condition that I was not searching for a relationship. Once she relayed that information to her son, addresses and emails were exchanged. That experience served as a lesson to me—that a simple hand-written note meant the world to someone I didn’t really know. That every day, I took for granted the life around me, with the uncertainty of another tomorrow. Life takes on a whole new meaning.

Eventually, my soldier pen pal and I did get to meet face-to-face. I remember feeling anxious before arrival time. When we met, he was just as his writing depicted. Although no romance came from this experience, I had gained a friend—a friend I truly respected.

Fast forward ten years…
Recalling some of my life’s events, I asked myself, “What if I wrote stories inspired by my life experiences?” “What if a girl became pen pals with an Army soldier, during WWII, and a romance blossomed—based on a series of letters?”

The end result?
I twisted the scenario around in my mind. Once I thought I had a good idea of where I wanted the story to start and end, I began writing. I didn’t own a computer at the time, so I started writing on line paper early in the morning before the sun rose. Within one month, I had penned (literally by hand) 60,000 words to my novel that is now entitled, Letters from Grace. The premise, based on the idea of my own pen pal letters, took shape. After its completion, Letters from Grace went on to claim a Top 28 spot in Harlequin’s So You Think You Can Write Contest in 2012 and became a semi-finalist in ACFW’s Genesis Contest, 2014.

For those who are reading, or who will be reading this novel, it is my hope you will find not just a tender love story through love letters but the hope that follows tribulation. Romans 5:1-4 states: “Therefore being justified by faith, we have peace with God through our Lord Jesus Christ: 2 By whom also we have access by faith into this grace wherein we stand, and rejoice in hope of the glory of God. 3 And not only so, but we glory in tribulations also: knowing that tribulation worketh patience; 4 And patience, experience; and experience, hope:”
Thank you for joining me today, and I also want to extend my deepest gratitude to Travis Inman for graciously having me on his blog today.

An Afternoon with Rachel Muller, Author of Letters from Grace

On a rainy afternoon last week, I had the pleasure of chatting with Rachel Muller, who authored an exciting new book, Letters from Grace. Let me give you a brief introduction to the book itself, and then you and I can discover who Rachel is, and why we would want to read her story. 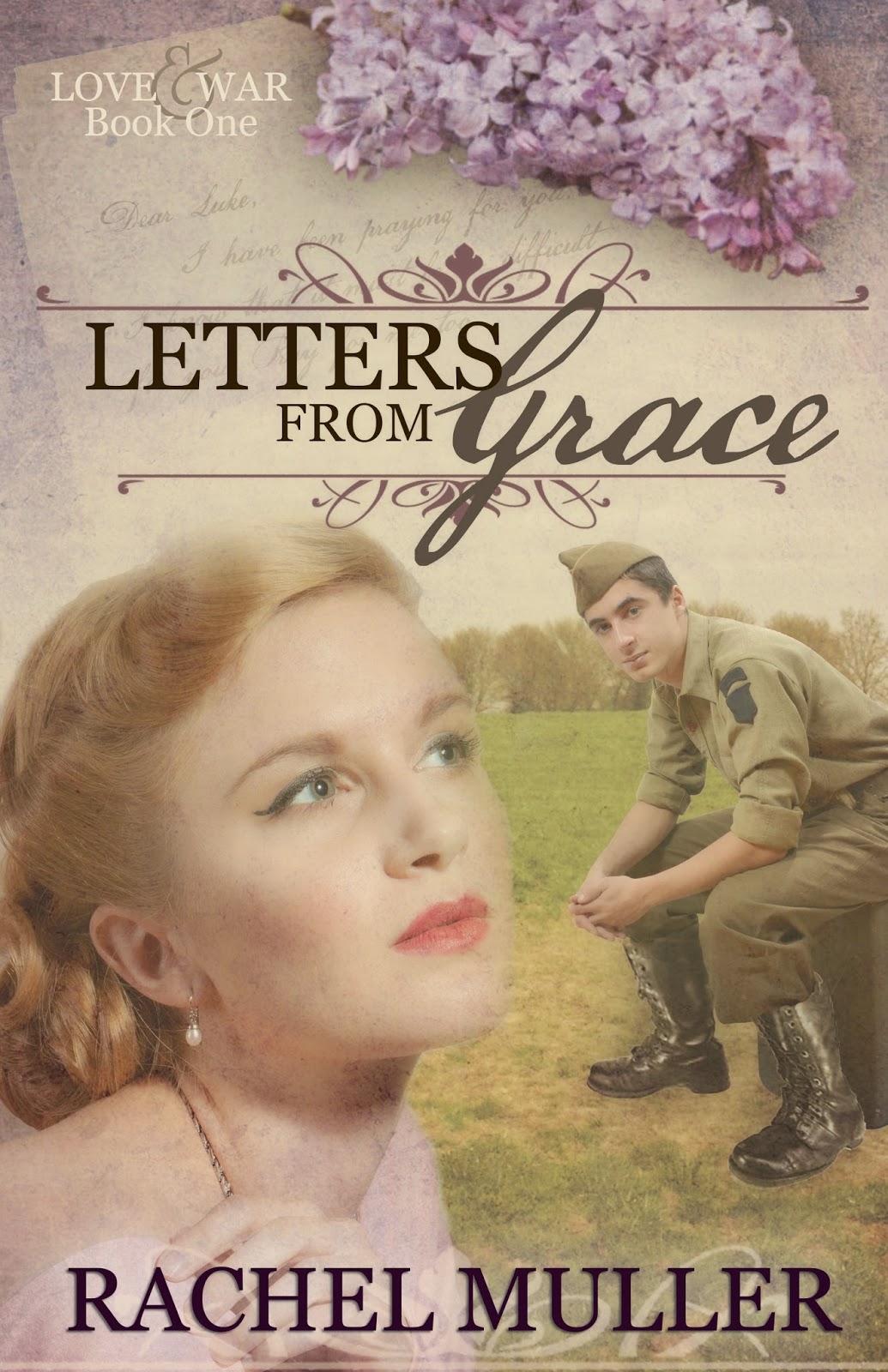 If you turn the book over, you will see the following description:
Is loving a man in uniform worth the risk?
The start of World War II has torn Grace Campbell’s only love from her life. Scarred and bruised from the loss of her fiancé, Grace must learn to love again…and trust the Father with her future. Lieutenant Luke Brady could make falling in love easy…except he’s about to embark on the largest mission of the war.

Luke is also healing from a wounded heart, but after a night of dancing with the flawless Grace Campbell, his feelings are held hostage by her charm, making the thought of traveling back to his army base in England almost unbearable. There is only one thing that can keep the thread tied between them…letters.

Their missives travel across the Atlantic, revealing their deepest feelings and unexpressed thoughts on paper. A spark is ignited, but the suave Dr. William Keller enchants Grace with his gentleman’s charm and proposes marriage. Now she must choose between them. Will she settle for comfort and safety or risk losing her true love on the Normandy beaches?

Don't you love the artwork on the cover? And how about that intro to the storyline? My wife read the back-matter and announced that she will be reading the book as soon as possible. If you love period novels, Letters from Grace will meet your needs.

Well, let's get back to Rachel, herself. A native of Maryland with Southern roots, she is proud to be a stay at home mother of four, and a beautiful housewife of eleven years. She grew up in the country, and though she can function with equal grace in the city, she prefers a quiet, grassy knoll to the hustle and bustle of busy streets.

Rachel has always been a woman of faith, and her faith is evident in her writing, even though she never reaches a "preachyness" so common with Christian literature. Her own faith walk defined who she would be during her teen years. She suffered from an affliction that many of us identify with: REJECTION. "I grew up in the country and went to church in the city. I didn't really fit into their world very well." As a young teen, not fitting in is almost impossible to overcome, and Rachel suffered greatly as a result. She slipped into withdrawal and endured what she called, "silent suffering," which manifested as anorexia. While trying to maintain her "perfect weight" she used over the counter drugs, but her life was falling apart. The more she spiraled, the darker her fears and hopelessness grew. Finally, a pastor's wife understood what she was experiencing and walked with her out of the anorexia and back into a healthy lifestyle. But her faith wasn't fully cemented until she went to a rodeo on day and saw the testimony of a bull rider who pointed her to Christ. Finally, she understood who she was and why she was here.
Rachel developed a passion for the "Greatest Generation" on a practical level. She lived with her grandparents for 13 years, listening to their stories about life during the depression and the events surrounding the war. Her grandmother was handicapped and required constant care. Rachel was blessed to invest into her grandmother's life, and her own life would never be the same.

"My love for World War II history began in my senior year of high school when I chose the Pearl Harbor attack as my research paper topic. Subsequently, the movie Pearl Harbor hit the silver screen and I jumped at the chance to see it. I didn't realize it at the time but a seedling had been planted in my life, slowly growing inch by inch for nearly ten years. I researched the war, the people, the fashions, 40's slang, even the makes and models of vintage vehicles to create a nostalgic feel in my project. Then fictional lives began to evolve on the white of my paper." From that passion grew a love story set in the depths of World War Two.

I asked Rachel what roll she would have played if she could transport herself to the 40s. Without hesitation she announced that she would have volunteered at a Canteen. And in case you don't  know how that works, a women who volunteers for the Canteen must adhere to strict rules of conduct, the most important of which is that while their job is to provide friendly companionship to and be dance partners for the men who are soon to be sent into combat, no romantic fraternization is allowed.
Rachel also expressed interest in touring with the USO, and specifically mentioned working with Heady Lamar and Bing Crosby. She was quick to announce that Bing was her favorite singer from that era, but she also appreciated Glen Miller.

I then asked her what she would do if she couldn't entertain the troops, and she declared that she would build bombers. "I would be a Rosie Riveter," and I could hear the smile she wore with that declaration.
When I asked her what she wanted for her readers to get from her books, she didn't hesitate. "The message I'd like people to get is based on Romans 5:1-4. Our life's trials are temporary, and when we rely on God to pull us through, we find our hope."

Naturally, my next question was, what do you want people to know about you? Her answer,” As for myself, I would like people to know that I write stories of love, war, and faith as examples of the love of Christ and His undying faithfulness. It is my hope readers will find inspiration and encouragement through the fictional lives of WWII era characters."

What more do you need to know? Well, I think this interview gives us a unique glimpse at who Rachel Muller is, and I pray that it motivates you to pick up a copy of her book, Letters from Grace.

If there is anything else you would like to know, shoot me an email or leave a comment. I know Rachel would love to hear from you. In the mean time you can connect with her via the following:

Posted by Travis at 4:39 AM No comments: