Connecting with your Kids: Fort Bella

I love spending time with my kids, and they are always at an age when they need to spend time with me. This project took us two years to finish. TWO YEARS! It should have taken 1 week, but, shortly after we started building, I fell down and broke some ribs, and then winter came. The next year I was sent out of town for my work and didn’t have any summer time left, and then winter came. Well, this year, I hurt myself again! (Apparently, I’m not 20 anymore, but I still try to work like I am.) But, despite it all, I was determined to finish this project.

Living in the Idaho panhandle, we have resources you might not have. For instance, I was able to buy enough logs to build this fort out of real pine trees. But, you can do the same thing using fence poles, especially if you buy the poles that are already pointed. They look like pencils!

So, our first step was to select a building site. This is what our back yard looks like.... 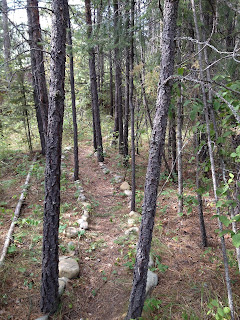 The previous year, we  built a teepee for the kids near the neighbor's fence on the side of the yard. That site only allowed for two walls to be constructed, but the kids wanted the teepee and the fort to be close together.
We began the task of digging out the footings... 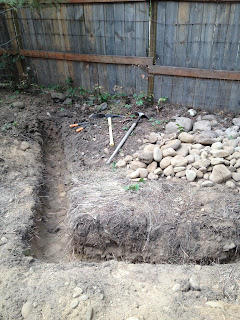 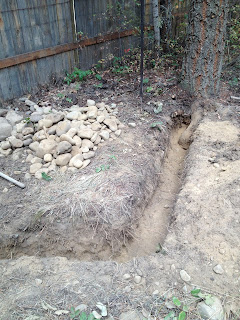 The footings were dug 18-24 inches deep. In some places, 18 inches was all I could get. We will use the rocks later to place around the logs and help reinforce them. So, footings are dug, we need logs. I ordered a load of logs to come to the house. I paid 10.00 for each log. They were 12 feet long and about 10 inches across. I wanted logs that were 6-8 inches, but that's what was delivered. 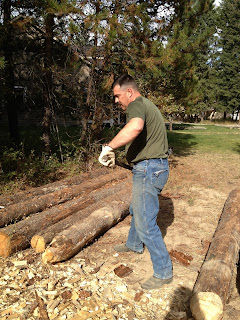 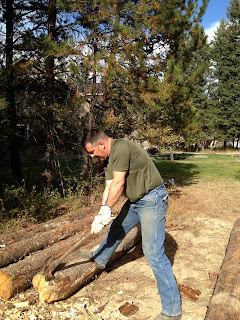 You have to be super careful doing this. The axe will glance off the log. Trust me. This is not something you do carelessly. 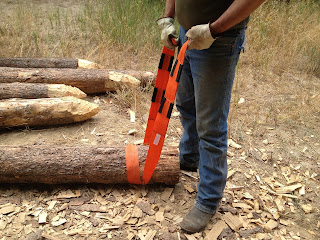 The next difficult task is to get the logs from point A to B. I decided to use some furniture moving straps, which allows my arms to be the forklift. It worked, but it was a hard task. The kids helped, too. They weren't as happy about this part of the process.
Next, we have to place the logs into the footings. The kids had to help me. I did the lifting, and they helped brace them in place until I could secure them using some 2X4s and five inch decking screws. 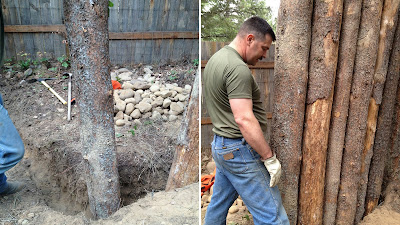 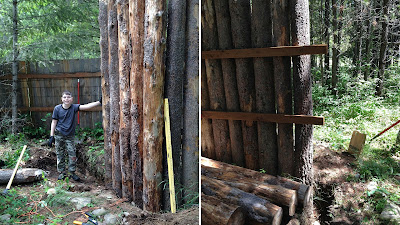 You want to make sure the 2X4s are level, as they will be used to for the decking in the next step. 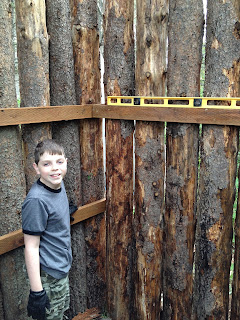 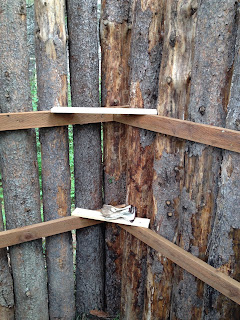 I placed some cross braces took keep everything from moving around. This is the point where I was injured and we had to put the project on hold. For 2 years! When we got back in motion, everything was just as we left it, which is a good thing. Next, we needed to build the decking. We designed the fort to have two decks. The lower deck serves as a step to get to the upper deck. This is why we didn’t cover the entire surface of the lower deck. Plus, my son thought it would be cool to have an opening to crawl through to the ground below. The first level is more of a stepping platform to the upper level. I placed some concrete blocks to use to support the decks across the length of the triangle shaped decks. The span from one end to the other was about 11 feet long. So, I placed the block, and used a 4X4 post to help support the 2X4 frame. We then used 2X6 boards to cover the decks. Don't forget to place at least 1/8 inch between the boards to allow for drainage.

Seth learned a lot about using power tools on this project, and demonstrated skill in his work by the end of the day. He and I had a blast working together! He’s already talking about doing the same thing with his own kids in the future.
So, because we needed to maximize space because our building site was limited, we built our walls where the corner was more like 50 degrees rather than a true 45. This made all of our cuts difficult. But, once we figured them out, we were able to get the decking in place in just a few hours. Some tell me I should have run the boards across rather. I’m not sure it matters. I consulted several contractors, and got several opinions. This is the path we chose.


I opted to buy pressure treated lumber, which would help weather our weather. It’s wet here. We get lots of rain. And we get snow in the winter, so longevity is an issue with outdoor decks. The problem with pressure treated lumber is the exposure to chemicals that are used to preserve the wood. One way around this problem is to buy redwood decking materials, which is expensive. Redwood lasts longer than regular pine or fir, and is fairly bug resistant. If you can afford to use redwood, then please do so. Another great option is to use a product such as Trex, which is composite decking. This product is awesome and should last about 25 years. Again, the problem is the price. It is more expensive than buying wood decking. So, I chose to use pressure treated fir.

This was a labor-intensive project. Shaping the logs and transporting them to our building site was tough. Standing them in place required two adults or one adult and two strong kids. Building the deck was not terribly difficult, and was certainly the funnest part of the project. But, look at those smiles! 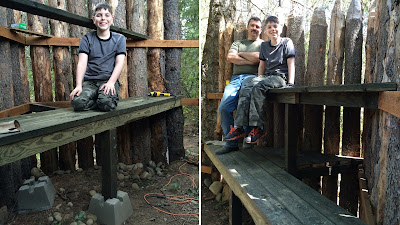 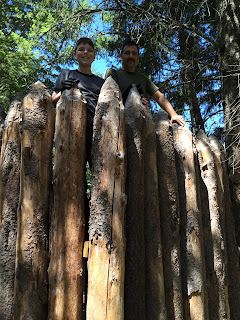 The only thing that remains is to add a flag pole!