Over a very long September weekend in 1988, I anxiously awaited the highly probable return of Christ, based on 88 very solid reasons He would return. The Christian evangelical community waited with eager anticipation as Edgar C. Whisenant's predicted dates (somewhere along the weekend of September 11-13) drew close. We were so convinced Christ would return that TBN even began to interrupt regular broadcasting to provide special instructions on preparing for the rapture. 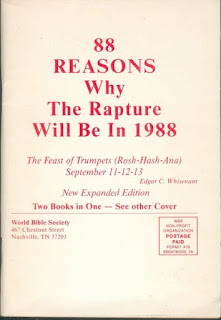 On September 11, we all awoke and waited. Several people I knew quit their jobs. Many gave their pets away to people who would not be joining them (at least until 7 years later). One man sold his business for dirt cheap and gave the money away to charities. We went to sleep slightly disappointed, but knew we still had the 12th and 13th, so no big deal.

When the 12th came, people were calling home to say goodbye to their families (who would likely join them 7 years later). I admit, it was hard to sleep on the night of the 12th. But, we awoke to the 13th with great vigor! Today was the day!

And those of us who didn't reject our faith learned a very valuable lesson. "No man knows the time." Eventually, I researched the topic of the rapture on my own and discovered that, although incredibly popular, it was not even sound theology.

So, what happened to the self-acclaimed prophet, Whisenant? He revised his prediction, realizing he made a small, but critical error, and made a second prediction in '89, and then '93, and then '94, and so forth until people finally quit following him when his '97 prediction went belly up. Since then, myriads of predictions have occurred. 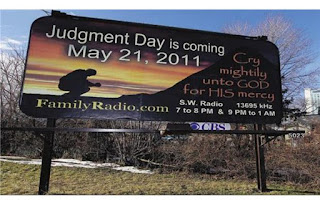 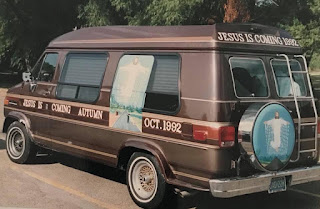 And my heart really hurts for those who pinned so much hope on the prediction from the stars, the "birth", and the eclipses. I would say to you, please don't become disillusioned. And believe me when I say, "I've been there." It's really hard to go back to work when you made such an effort to cry out to people to repent, for the time is nigh. As hard as it was, brush it off, learn from the mistake, and drive on. Refocus living your life on a day to day basis with Christ, and trust that HE knows what's really going on.
Posted by Travis at 6:16 AM No comments:

Email ThisBlogThis!Share to TwitterShare to FacebookShare to Pinterest
Labels: 88 Reasons why the rapture will be in 1988, false prophet, rapture
Newer Posts Older Posts Home
Subscribe to: Posts (Atom)