The Art of "When Love Called"

The Art of When Love Called, Book I of the Glenfield Series 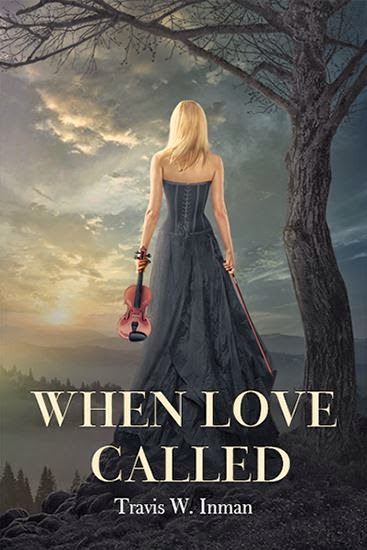 First, let me say that I love the artwork for the cover. I discovered this artist, Burak Ulker, who is from Turkey. I can't imagine an image more appropriate for Lily and the storyline. Burak has graciously agreed to provide covers for the rest of the series! What a stroke of luck!

If you are interested, I am going to be selecting artwork for the short stories and novellas I will be publishing as free/supplemental material that will accompany the Glenfield Series. So, if you have artwork you think should be considered for those free downloads, shoot me an email and we will discuss it.


I’ve had many comments from various people indicating they are curious about the works of art I mention in my novel, When Love Called. Well, the best way for me to satiate your curiosity is to present my pitiful attempt at art appreciation. Art is a fascinating and wonderful expression of our culture. It’s also a gauge of how healthy our culture is. All of us vary on what we consider good art and bad art, so please don’t thrash me for the art I used in my book; it was simply a tool used to “paint a picture” in your mind. 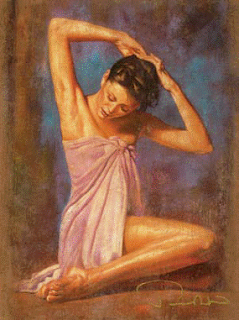 One very important piece in the novel is a giclée on canvass by Tomasz Rut entitled, Campaspe. As you see here, Campaspe is a young lady with soft chestnut hair. She is tastefully arranging her hair, as if she’s preparing to retire for the night. I chose this work because when I see Campaspe, I see Mary, Caton’s first wife. Mary was graceful and elegant, and Caton saw the same qualities in that painting, so he purchased it. The problem was, after Mary died, he wasn’t able to take the painting down. God challenged him as to whether he was in love with the memory of Mary or the painting on the wall.

*Note: In giclée, the ink is sprayed on to your choice of media in millions of colors utilizing continuous tone technology, retaining all the fine detail of the original.


Perhaps the most controversial artwork in When Love Called is also by Tomasz Rut, Exsomnis. Exsomnis is a very passionate and sensual illustration of the desire shared by two lovers. I hesitated over using this piece for several reasons. First, many conservative, old-fashioned readers might view this work as inappropriate. My readers tend to be very old-fashioned, and that’s a trait I identify with very well. While no nudity is revealed in the work, it leaves little to the imagination. Second, this reveals a private moment and I am cautious about taking a private moment too far. 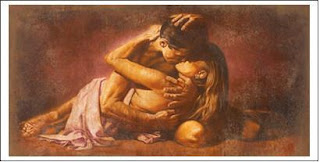 Please, allow me to explain further. I think Christian stories tend to be so filtered that they become sterile. It is my opinion that Christians should be the most passionate lovers when it comes to romance. Christians operate out of genuine and generally unselfish love, as the model union is a man and his wife, not a man and his mistress—or girlfriend. The passion between a married couple should be that of a lifetime of commitment and desire, not a fleeting moment of selfish indulgence. Caton and Lily share a deep desire for each other, and their desires are blessed by God. I believe the passion represented in Exsomnis is indicative of their love. Therefore, I share it with you not as a lusty love scene, but rather the passion of a man for his wife.

Another artist featured in the book is a man from Ajo, Arizona named Joseph Gulick. Mr. Gulick is a master at desert paintings, but with seascapes, his art leaps beyond the skill of a master, and takes on the qualities of genius. I met the Gulicks several years ago when I was spending the summer in Ajo, and when I saw a series of seascapes, I sacrificed what I had in order to secure those paintings.


The first is an oil on masonite entitled, Pacific Sunset. We had trouble getting the photos of the paintings to come out with the precise coloring intended by the artist, but you'll get the idea.

The last is an accompanying oil on masonite named, Full Sail.

You can see the depth of the waves, and if you stand in front of the original, you can feel the waves as they crash against the shore. Mr. Gulick has captured the sea, and he makes it look easy. Caton and Mary lived their lives in the beautiful Sacramento Mountains in New Mexico. How ironic that they would live in the crux of beauty and still find seascapes enchanting. One can never be satisfied when trying to embrace the grandeur of God’s creation. 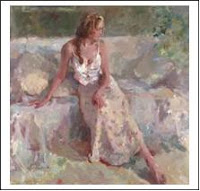 Another painter I mentioned is an artist named Alexander Chen, who has a canny ability to seize serenity and beauty. His grasp of heavenly women almost creates a mystical work. His work has been described as sensual but not provocative. I chose his art because of the innocence and wonder alive in the mind of a child. While I never mentioned an exact piece, I will provide you a demo of his work.


Finally, as I take my leave, let me give you one more thought that connects When Love Called to modern art. Jayne is a familiar character, and perhaps the character who draws the most comments. She is dangerous and determined. She is controlling and beautiful. She is a user and a taker. She is selfish and narrow. Yet, she is broken inside and still has the heart of a little girl looking to have a father reach out to hold her. I have made both Lily and Jayne to be musically inclined, and I often thought that the following artwork would depict Jayne’s plight, especially as she comes through the tragedy brought on by her lascivious lifestyle. As is common with the trend I established earlier, it too is a work from Tomasz Rut, Communia, which is a depiction of a young woman expressing a deep spiritual moment.


More of Jayne’s life will be revealed in Book II of the Glenfield Series, Then Came Grace.

Interested in When Love Called? Find out more at http://www.traviswinman.com/
Posted by Travis at 11:03 AM 26 comments: